I am writing this while we are in the midst of a heated and painful debate about voice appropriation and Indigenous authors that we surely all hope will, in the end, be useful and productive.  Access to publishing is a relevant issue at all levels of publishing, even the micro level, but those of us who read chapbooks can rely on rob mclennan to provide a host of interesting voices with his busy above/ground imprint.

Jordan Abel is a Nisga’a writer who lives in B.C.  He writes in the afterword:

The pieces in Timeless American Classic are all derivations and creative distant readings of James Fenimore Cooper’s novel The Last of the Mohicans.  This project was in part inspired by Roxanne Dunbar-Ortiz’s argument (in An Indigenous Peoples’ History of the United States) that Cooper’s novel plays a role in reinventing the colonial origins of the United States, and in creating a narrative that was “instrumental in nullifying guilt related to genocide.”  Ultimately, this project seeks to disrupt the colonial logic in the novel by displacing (and reorienting) the text itself in order to expose the problematic representation of Indigenous peoples.  The project is also deeply inspired by current digital humanities techniques of visualization, machine reading, and algorithmic allocation.

My first thought was that Cooper’s 1826 novel was not really on our Canadian radar as a significant text, but my second was that anything that influenced the standard American narrative must surely be an influence on us here in Canada.  There are various ways of exposing or upending that narrative. One is through protest, newspaper editorials, film, etc. – in other words, through the media in ways that reach a large number of people.  But another way is quieter, its canvas smaller, Timeless American Classic being an excellent example of that.  If small-circulation chapbooks matter at all, then they matter here as well.

Abel’s method, as I make it out, is two-fold.  In the first, he draws out phrases from Cooper’s novel that contain the word “Indian” and isolates them in parallel texts with the word itself running forcefully down the centre.  Here is a reproduced example:

The second way is to create a kind of visual collage, either by overlapping sentences or by (as in the following example) employing different text sizes and directions and grey scales: 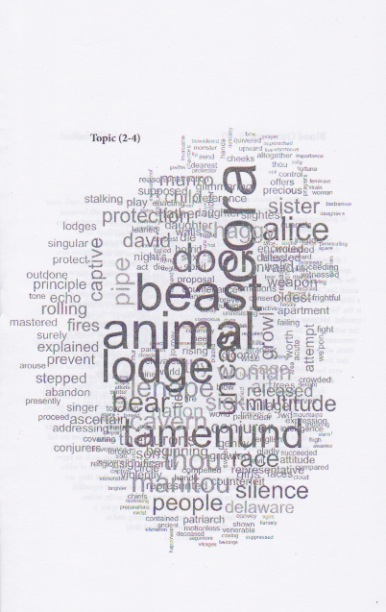 I don’t know much about “current digital humanities techniques” or “algorithmic allocation” and it’s more than likely that some of the results of this text play is lost on me. I find both quite effective visually and that their general impact is strong.  I find it much harder to actually read every word on a page (am I supposed to?); rather, my eye skips from here to there, picking up a word or phrase.  Is it ironic that the collage-like pages are so visually appealing?

The book begins with a useful quotation from Roxanne Dunbar-Ortiz so that, all in all, this modestly-appearing chapbook provides a powerful introduction to both the influence of a “classic” text and the way in which that influence might be challenged.

Kaveh Akbar was born in Tehran to a Muslin family and grew up in the U.S. (He now lives in Florida.) He writes personal, confessional lyrics, a kind of poetry that I haven’t been encountering in chapbooks lately. Usually the poet is far more elusive and hidden these days, but part of Akbar’s strategy is to tell us who he is, perhaps (I might be crossing a line here) to expose himself and still hope that we’ll care about him.

It felt larger than it was, the knife
That pushed through my cheek.

Immediately I began leaking:
Blood and saliva, soft as smoke. I had been asleep,

Safe from sad news, dreaming
Of my irradiated hairless mother

Pulling a thorn from the eye of a dog.

Another unusual aspect of Akbar’s poems (for these days) is their absorbing narrative. In “Calling a Wolf a Wolf (Inpatient)” the poet waits in a medical facility, alternately trying to control his thoughts (“everyone’s forgotten I’m here,” “I try to find small comforts”) and recounting a news story about a drowned tourist (“his bloatwhite belly was filled with radishes and lambshank”). The poem appears as a wide, vertical rectangle, each statement separated by a caesura that gives them breathing space and makes it, like all Akbar’s poems, easy to follow.

This ease is part of the seductive quality of these poems, an aspect that I’ve been struggling with how to characterize. It feels to me as if the poet wants to win us over, win our love and our pity, and that this, too, may be part of his alcoholism or may emerge from the same vulnerable place.  I hear this in lines sprinkled throughout the poems—

When I wake, I ask God to slide into my head quickly before I do.

Lord, I meant to be helpless

I was born the king of nothing

You should just hang me / in a museum

Let me be / calm for one fucking second

I blame everyone but myself

I don’t know if someone else would read these lines the same way, but they strike me as both self-romanticizing and touchingly human.

Another thing that makes Akbar so appealing is the strong presence of the child in the man. He recalls his boyhood as a kind of touchstone of innocence, sometimes feeling still the child inside him: “As a child I was so tiny     and sweet she [his mother] would tuck me in saying moosh bokhoradet a mouse     should eat you”. Elsewhere he finds his young self bewilderingly inaccessible: “I don’t understand the words / I babble in home movies from Tehran”. These lines come from a particularly sympathy-inducing poem that mixes a story about Hazrat Ali, the brother-in-law of Mohammed, with his own desire to die sober.   The poem ends this way: “I will keep making these noises     as long as deemed necessary until there is nothing left of me to forgive”. The line almost gives the impression that, once forgiven, there will be nothing left of the poet at all.

The question of, the need for, forgiveness is a continual quest throughout and it draws us in, as if we the readers might be able to offer this hungered-for absolution.  But forgiveness, perhaps, comes not from others but only from the self. As the poet writes late in the collection, “one way to live a life is to spend each moment asking / forgiveness for the last”.  This seems like a longed-for ascetic practice, a way of being alive to the moment, and an escape clause for a feeling of continual trespass.  May the poet find them all.