Not long ago I reviewed a chapbook (Carrie Olivia Adams’ Grabble) that was originally the spoken text accompanying a dance performance.  Suzanna Derewiez’s poetry sequence was originally a theatre piece, performed at the London (Ontario) Fringe in 2014.  While it was easy to imagine how Adams’ work was meant to accompany the movement of dancers, it’s harder to see  Maggie Monologues on the stage.  The words don’t seem particularly performable or dramatic, don’t feel much to me like spoken words.  Also, there’s the matter of the illustrations.

Many illustrations (drawn by Bogumila Derewicz) accompany–or rather are integrated–into the poems.  Perhaps the best example is the begining of the first monologue, where the words “a suitcase” and “a taxi” (or something like them are represented by images: 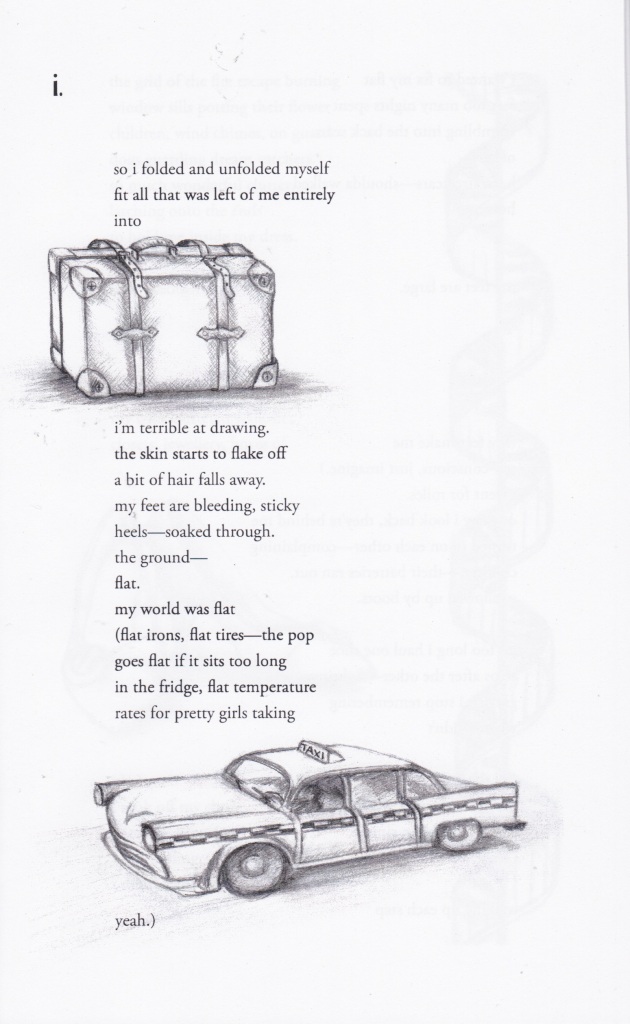 As you can see, the pleasing drawings have a retro, 1940s-ish feel. They’re soft and rounded and I might even say cute; I’m not exactly sure what they add to the poems, but they make the chapbook itself a nice object.

There are fifteen poems, or monologues, and they can’t be described as cute.  They are confessional, unhappy, suffocating.  They are the voice of a person who feels that she is flaking away, bleeding, and (in the last poem) shrinking. It is a voice that imagines itself on a track with no warning of an oncoming train, as a young girl being teased by others, as a dreamer screaming.  They are sometimes dated, as in a memory from “’52 or ’53” of new skates:

i guess i forgot how to love someone,
but i can’t seem to forget balancing on
thin ice holding her hand.

This is a poignant moment, even if I’m unsure who the “her” refers to.  There’s a lot that is confusing about these poems to me–the language is ordinary enough, and the ideas aren’t dense–but I found myself losing the thread over and over.  Even so, the feeling of the poems didn’t leave me.  I felt keenly the speaker’s wanting “my world to be just like this”–words followed by a pretty image of a snowglobe.

Chapbooks are the natural home of avant-garde, experimental or simply peculiar writing.  They are not, for the most part, created to serve an audience, but to serve the art.  The hope is that a handful of readers will be willing/able/interested enough to peer through this particular window and try to make some kind of sense of what is going on.

Through the window of House of Many Words is a stage.  The stage is a mound of earth upon which stands a doorway.  In the doorway a sheet is stretched, upon which shadows fall.  This is the setting of Kemeny Babineau’s impossible little theatre piece; does it vaguely recall Beckett?  The cave in Plato’s Republic?  Or are these mere coincidences?

There are four characters, listed at the front as in any published playscript, although instead of “Willy Loman, a Salesman” or “A Boy” we get: “MANY WORDS,” “MANY PEOPLE,” “LAND BARREN” and “NOBODY.”  Each of the ten acts is brief, taking up a single page of instruction.  In Act 1 MANY WORDS “fills the doorway,” only to take up three separate stances (one involving “old dogs” that “bend their pricks / on dry haunches”) only to be immediately erased or negated with a “No.”  Act 2 contains the first of many directions that cannot be fulfilled–“Not even MANY WORDS could explain / how the fire moved them”.  MANY PEOPLE appears in Act 4, slamming the door (but is there a door or just a doorway?) while NOBODY pokes a fire in Act 5, “sparking up a nest of stars,” an unusually poetic phrase for this rather bare-bones text.  Land Barren does not appear until Act 7, being prevented from entering by MANY PEOPLE, although “many people (sic) argued / that Land Barren was already in….”

It’s quite possible to see this not as a play at all but as a poem, given the deliberate line breaks.  I think my paraphrase of some of the text indicates that it isn’t in any sense a coherent drama, but rather something more like a dream, a game, a refusal, an attempt, a stand-off.  The feeling it gives me (is it the right feeling?  Is there a right feeling?) is rather bleak, cold, and existential, like watching figures that are half-human and half machine bumping into each other in a dance that isn’t a dance at all.

It is notoriously difficult to capture one art form in another; can one do more than search for clumsy equivalents, fractured reflections?  And yet when I read Carrie Olivia Adams’ Grapple for the first time, it was if I could see the movement and struggle of bodies in my mind.  Not only the words themselves but the placement of the lines, fragments across a wide page, evoked extension and constriction, stillness and action.

My first reading was without benefit of the “Notes on the Composition” which comes after the eight-page poem.  I did have the image on the cover, and two inside, to know this was a dance in words.  And the epigraph by Nawal El Saadawi told me that the poem was about movement and passivity, surrender and resistance.  But it was only upon reading the notes that I understood the poem to actually be a text that had accompanied a dance performance–a performance inspired (if that’s the right term) by the arrest of “a young African American man during a protest as part of Moral Mondays Illinois in Chicago in November 2015.”

The poem begins with two definitions of the title–“to stop the progress or movement of / (something)” and “to attract and hold the attention of / (someone or something).”  This apparent contradiction, or mirror-imaging, is carried on throughout, with “strength” linked to “vulnerability” and going “limp” being an “act of resistance / …an act of / strength”.  There is a particularly telling moment when

But we are so close

These words seem to me both powerful, frightening, and almost beautiful.  On the poem’s next page, however, the poet becomes somewhat less nimble, writing in true, if sloganeering fashion, of a city that “forgets / the backs on which it is built”.  But then the poet becomes more suggestive again:

Tell us again how you know

These words were spoken to a dance created by Chicago choreographers Jamie Corliss and Lydia Feuerhelm, who were also the performers.  According to the “Notes,” the dance and the words were intended to “work with and against each other,” echoing the tension within the poem itself.  I certainly would have liked to see this performance in which “intimacy and aggression overlap” but the poem works well on its own, especially with the accompanying photographs.  It is a work that, while for the most part not allowing its political purpose to diminish its artistry, never forgets that purpose. 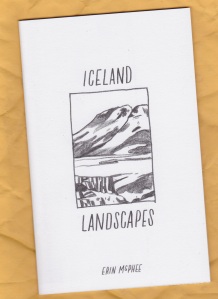 If ‘chapbook’ has any association for a person it’s usually poetry.  But of course the chapbook form is being used these days to present all kinds of material, including visual.  Erin McPhee is a Toronto freelance illustrator and art director (I know because I looked her up) who has self-published this travelogue/diary of a week-long artist residency in southern Iceland.  It’s primarily a gathering of drawings, presumably made on site although there is no information here, including the medium (pencil? charcoal?).  The drawings leave people out.  They are all of natural formations–rocks, waterfalls, sky, twigs, and a particularly attractive and sensual striped stone found on a beach.

On opposite pages of most drawings is a paragraph or two of handprinted text.  These have something of the feel of postcard  intended for a distant friend, as if to say, “Here I am in this amazing place.  Can you believe it?”  They feel quite genuine and make me want to be standing alongside her.  Perhaps McPhee’s observations are no more insightful than anyone else’s, but they are enjoyable to read..  Once she gives a little more of herself away (“I was certain I was going to die (as so often I am)” but I think the real purpose of the text is visual, as a nice counterpoint for the image across.

This chapbook is printed (at Pindot Press) by Risograph, a process I have only recently heard about and that is something like silk-screening.  I gather this kind of printing works best on heavy matt paper and is particularly good for visual content.  It has made a very nice object in Iceland Landscapes with its subtle variations of black and grey on paper that feels good to the touch.